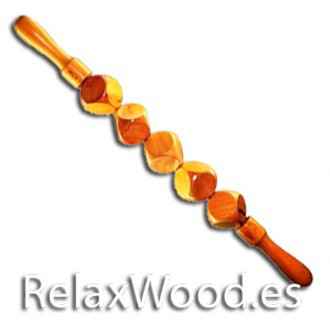 The five cube roller is one of the most used and requested accessories in wood therapy applications. Like all the accessories used in these techniques, it is manufactured with noble woods, the most common being those made of cedar wood. The rollers formed by cubes are an updated variety of the first accessories designed for the application of massages, because the experience of the experts in this millennial technique, concluded that when making the massages on a given surface exerting focused or punctual pressure on the same one and not uniformly, promotes the metabolism of the tissues, because it allows the areas where each cube exercises its function, drain, pour or communicate quickly with the neighboring tissue areas where the cube is not working, which facilitates incredibly and quickly, the elimination of impurities, toxins and fats.

The most usual application of the five cubes roller is for extensive regions of the human body such as hips, flanks, thighs, buttocks, abdomen and legs, contributing to the reduction of body mass, the elimination of lipodystrophies, the reduction of cellulite and fibrosis and is effective as a therapeutic massage.

It must be taken into account that both lipodystrophies, fibrosis and cellulite require in most cases specialized medical attention; however, being wood therapy a natural non-invasive application, it becomes quite useful as an adjuvant to medical treatments, mainly in the initial stages of these pathological processes, which in many occasions are solved with the application of massages in a serious, constant and professional way, not even needing medical help.

The expert in wood therapy must handle well the basic biological concepts of the different pathologies that can be presented and thus can apply the corresponding massages with greater certainty and have better results. Thus, it can be mentioned that lipodystrophy is the focal accumulation of excess adipose cells that alternate with small areas where fat cells are diminished or absent, producing hardened spherical conglomerates that result in giving the skin an irregular appearance. In the case of cellulite, a chronic inflammatory process that has its origin in metabolic and hormonal alterations, the skin looks irregularly lumpy alternating with depressions also irregular, with a very characteristic aspect known as "orange peel". On the other hand, fibrosis is the increase in the formation of connective tissue after a bad reparative or healing process that leads to the formation of hardened zones in the skin as a consequence of not having a good exchange of substances between the cells present there.

The five-cube roller is also very useful for treating the well-known hard skin, flabby skin and oedematous skin. Hard skin is when a dermal area is more compact than the rest of the skin to the touch. Flaccid skin shows less hardness than its surroundings, giving the sensation of being lax or elastic. Oedematous skin is soft skin that sinks temporarily when pressed, usually the area is painful.

For all these conditions the most recommended are the lymphatic drainages and in a natural non-invasive way, this therapy is offered with positive results with the application of the different techniques and devices used in wood therapy and in a very specific way with the use of the five cubes roller, that due to its particular design is very effective in the realization of lymphatic drainages. In these cases when a lymphatic drainage is needed, or also a circulatory drainage as in the case of edematous skin, the five-cubes roller must be moved with movements in the direction of the lymphatic circulation, that is to say directed towards where the lymph nodes are located (neck, armpits, inguinal region, navel, popliteal region) and thus facilitate the detachment and circulation of cells and accumulated substances and favour their final elimination from the human body through the urine, after they have been taken to the kidneys.

On the contrary, if the aim is to firm up the muscles and shape the figure, the five-cubes roller should be used against gravity to make the tissues return to their natural and original position and recover the proper tension and texture.