> Bodycare>Moulding board for wood therapy treatments 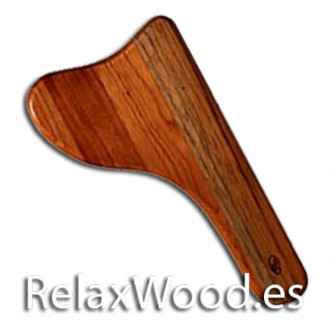 Moulding board for wood therapy treatments

The Woodworking Moulding Board is used to tone, shape and define the most difficult areas of the figure. It drains fluids and fat accumulated in the body to the nearest node area. It facilitates circulation and thus edematization.

It should be borne in mind that wood therapy, a technique that originated in Chinese culture and is now widely used worldwide, is a procedure that in principle seeks to restore mental health by improving the physical conditions of the human body. It is based on the application of massages through the use of utensils built with the well-known noble woods such as cedar, walnut, ebony, mahogany and oak, which are characterized by their high hardness and uniformity of structure, which guarantees that they can be submitted to a perfect sizing and polishing, without suffering deformations or splinters with use.

The various tools used in Wood Therapy are designed based on the natural curvatures of the human body and are meticulously modelled trying to follow the smallest aspects in the shape of these curvatures, to guarantee the contact in the totality of the body surface to be treated, in order to recover the natural moulding of the region submitted to the treatment and to improve its physical conditions by means of tissue stimulation.

One of the most demanded accessories is the Molding Board, since it is widely used in different parts of the body, such as the waist, hips, abdomen, buttocks, legs and arms, and it can act in the most difficult parts of the body to be treated with other instruments used in aesthetics, due to the wide versatility that they have, in addition to being ergonomic, they are almost for single use, since they are manufactured according to different sizes, corpulences and heights that human beings have.

The main purpose of the Moulding Board is to favour the mobilisation of the deposits of fatty substances that are predominantly stored in the abdomen, in the contour of the waist, in the hips and in the buttocks.

This effect is obtained as a result of the massaging and vibrating effect of the Moulding Board which activates the lymphatic and blood circulation. The lymphatic system formed by the lymphatic vessels and the lymph nodes, is an open system of circulation that goes from the extracellular space of the tissues to the bloodstream and to the lymphatic nodes, being the circulation in one direction which favours the cleaning of the tissue by helping the elimination of unnecessary substances for the cellular environment, even though they also transport liquid and protein-type substances. The lymph nodes are distributed to all tissues, but some of them are grouped to fulfill their function in a larger regional area of action, at the level of neck, armpits, chest, abdomen and groin area.

The Wooden Therapy Moulding Board not only tones up, corrects and improves large areas of the body and mobilises the fatty substances accumulated in these areas, but also drains off excess liquid by reactivating the blood microcirculation, which generally also accumulates, thus solving the problems of oedema that usually accompany fat deposits. It is also very effective in the elimination of cellulite making the unwanted orange peel effect disappear.

For the use of the Moulding Board it is recommended to divide the regions to be treated in sections, this way better results are obtained. The explanation for this is that as its use is mainly for large body parts, better results are obtained by applying the technique to smaller areas. To cite an example, the abdomen should be divided into the upper and lower central part, the left lateral part and the right lateral part.

Acting in this way, in addition to the expected results mentioned above, the skin becomes smoother and brighter. It is also recommended to make the massages in a zig-zag way and directing them towards the lymph node group closest to the treated area. 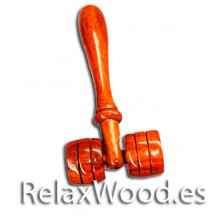 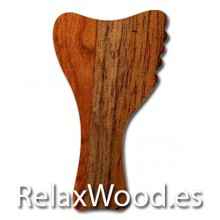