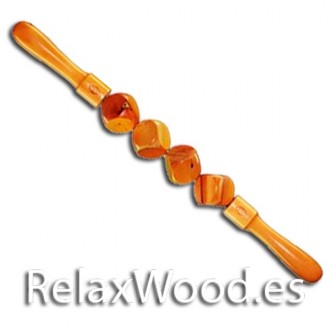 The rollers in their different design varieties, are widely used instruments in wood therapy, because they offer a wide versatility to be applied in different parts of the body. Among them is the four-cubes roller that is mainly used for massaging the sides, waist, abdomen, hips and legs.

With the use of the four-cubes roller, besides the relaxing effect of the massage, you also obtain a reduction of the body mass, reduce the manifestations of cellulite, control the muscular hardening produced by the loss of elasticity of the muscular cells and help to recover normality in cases of lipodystrophy.

The four-cubes roller is made of fine wood, it is made up of four small blocks that are independent from each other and that rotate around a central axis. The fact that it is not a continuous block of wood helps its effect on the body tissues to be more beneficial since each cube autonomously exerts its action.

The four-cubes roller is applied by sliding it, firmly and continuously, from the area to be treated to the nearest anatomical area where the lymph node groupings are located, such as the neck, armpits, navel, groin area and popliteal region. This recommendation is to favor that the adipose cells or fat cells, detached from the unwanted accumulations, move through the lymphatic vessels to the lymph nodes, later that rasa stops to the return blood circulation until being led to the kidneys, where it is excreted through the urine.

As can be seen and as with the other applications of wood therapy, the use of the four-cubes roller is a natural and non-invasive procedure, which helps to eliminate adiposity and liquids without the need for surgery. This is why it is very useful in cases of lipodystrophy, which is a health condition produced many times by the frequent application of injectable treatments or the intake of antiretroviral drugs, which leads to the targeted disappearance of adipose tissue, known as lipoatrophy or the exaggerated and pathological accumulation of fat called lipohypertrophy; it is common to find the presence of both situations together, combining areas of absence with areas of fat accumulation.

This technique of the wood therapy, besides producing well-being and vitalising stimuli, provides effects of tranquillity and relaxation, generating a greater muscular agility at the same time as it moulds the body figure optimising its contours, which has important and beneficial repercussions on the emotional sphere of the person. These results are enhanced if the use of wood therapy is accompanied by physical exercise and the consumption of an adequate and healthy diet.

The four-cubes roller has an effect even on the fatty tissue located in the deepest regions of the body surface at the level of the hypodermis and is recommended to treat areas of high fat content such as the thighs, abdomen and buttocks.

To obtain positive and lasting results it is recommended to apply the massage in a linear way alternating with zigzag movements, completing three series of ten sessions each. At the end of these three sessions you will see the real results, although the first changes may be evident after the third day of the first series. Initially the massages should be applied on alternate days because occasionally, when starting the treatment, they can cause some kind of discomfort or pain.